Okay, I’m going to jump right in and say it, even if it makes me look stupid… PUFFINS – who knew they were so small??

I’d never seen a puffin in real life until we stayed at Point Farm for a few days and took a boat out to Skomer Island, but seriously, in all the pictures I’ve ever seen they look about the size of a penguin? All I can say is that those pictures must be VERY close up, because puffins are actually more like pigeons. Pigeons with big heads and colourful beaks, but pigeons nonetheless.

Honestly, my mind was blown. I felt like a right idiot having spent 43 years imagining these penguin type birds, nesting on rocks and beaches, when all the time there they were, using their tiny beaks to burrow underground.

Spoiler: this is not an accurate representation of a puffin: 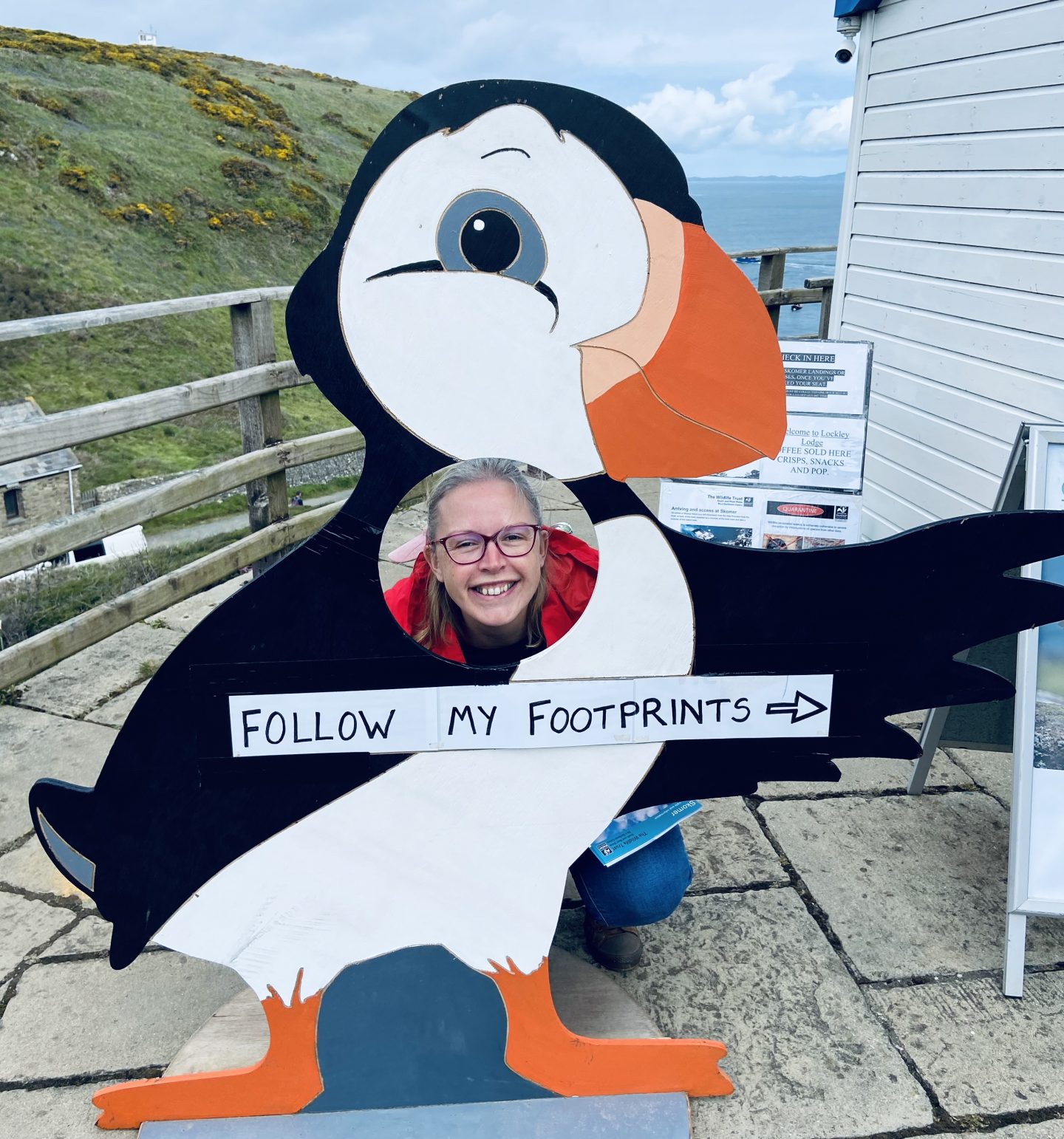 If you do want the chance to see puffins in real life, which I absolutely recommend, then Point Farm on the Pembrokeshire coast is the ideal base for a holiday as it’s just a 15 minute drive from the campsite to catch the boat over the Skomer Island.

It’s also a really lovely campsite, puffins aside. Point Farm is small, (just like the puffins), so perfect if you like a bit more of a quiet, intimate camping experience without a lot of noise or kerfuffle. Point Farm is an eco site, dog friendly, with great facilities and amazing sunsets. There are just six camping pitches, plus two fully equipped shepherd’s huts if glamping is more your thing.

Glamping is definitely more my thing – I will quite happily go to my grave never putting up another tent – and so we stayed in the very cosy Tawny shepherd’s hut. 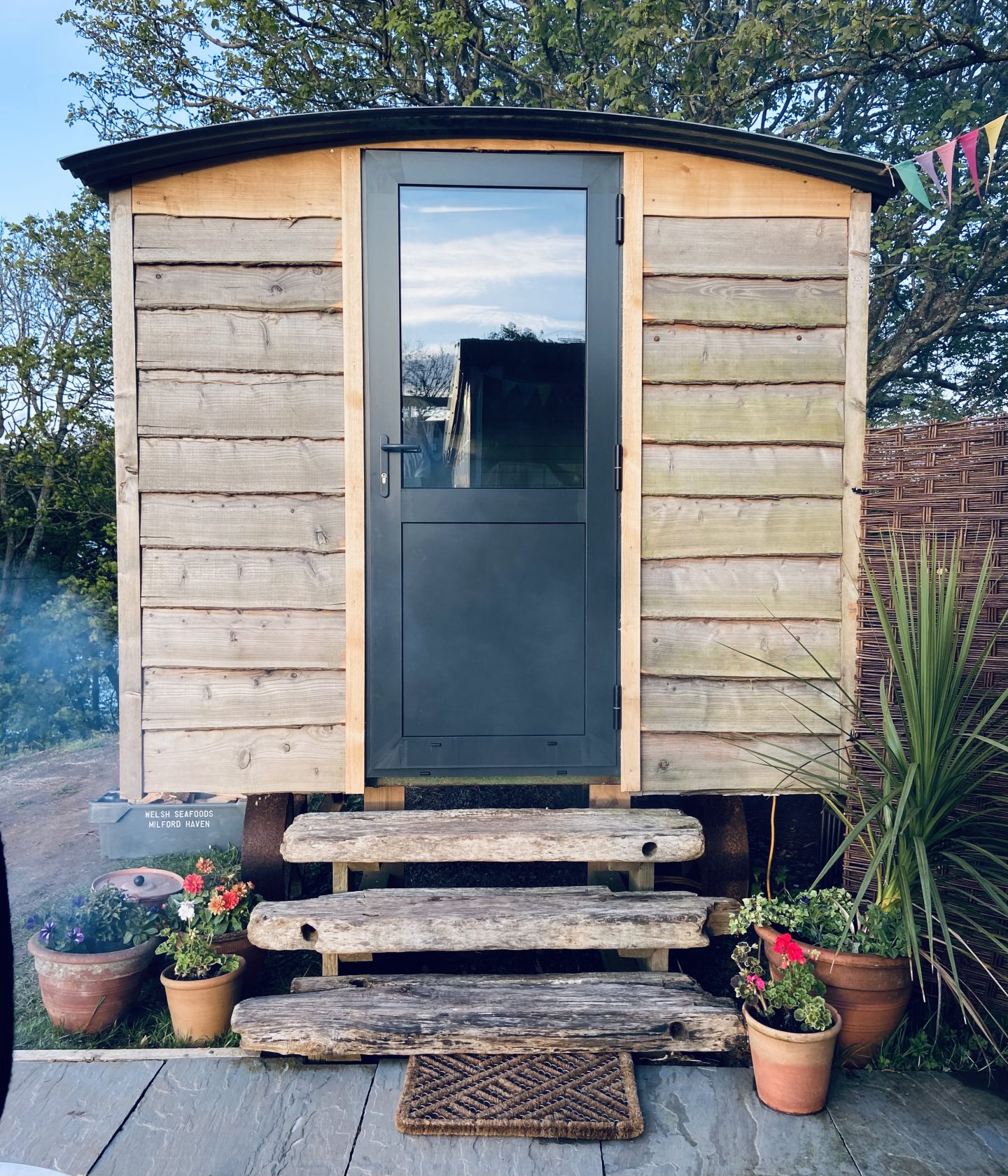 The main hut is basically your bedroom, and comes equipped with a king size bed, single bunk and optional extra single bed. The mattresses and bedding are great quality so you don’t have to scrimp on a good nights’ sleep just because you’re camping. (I think you can get away with saying you’re camping when going to the toilet in the night requires clothes.)

Behind the main hut is a separate, private bathroom, with a proper toilet, sink and shower. The second shepherd’s hut has its bathroom ensuite, so you can pick which option you prefer.

The rest of your set up at Point Farm consists of an outdoor kitchen, covered dining area and your very own patio and firepit. 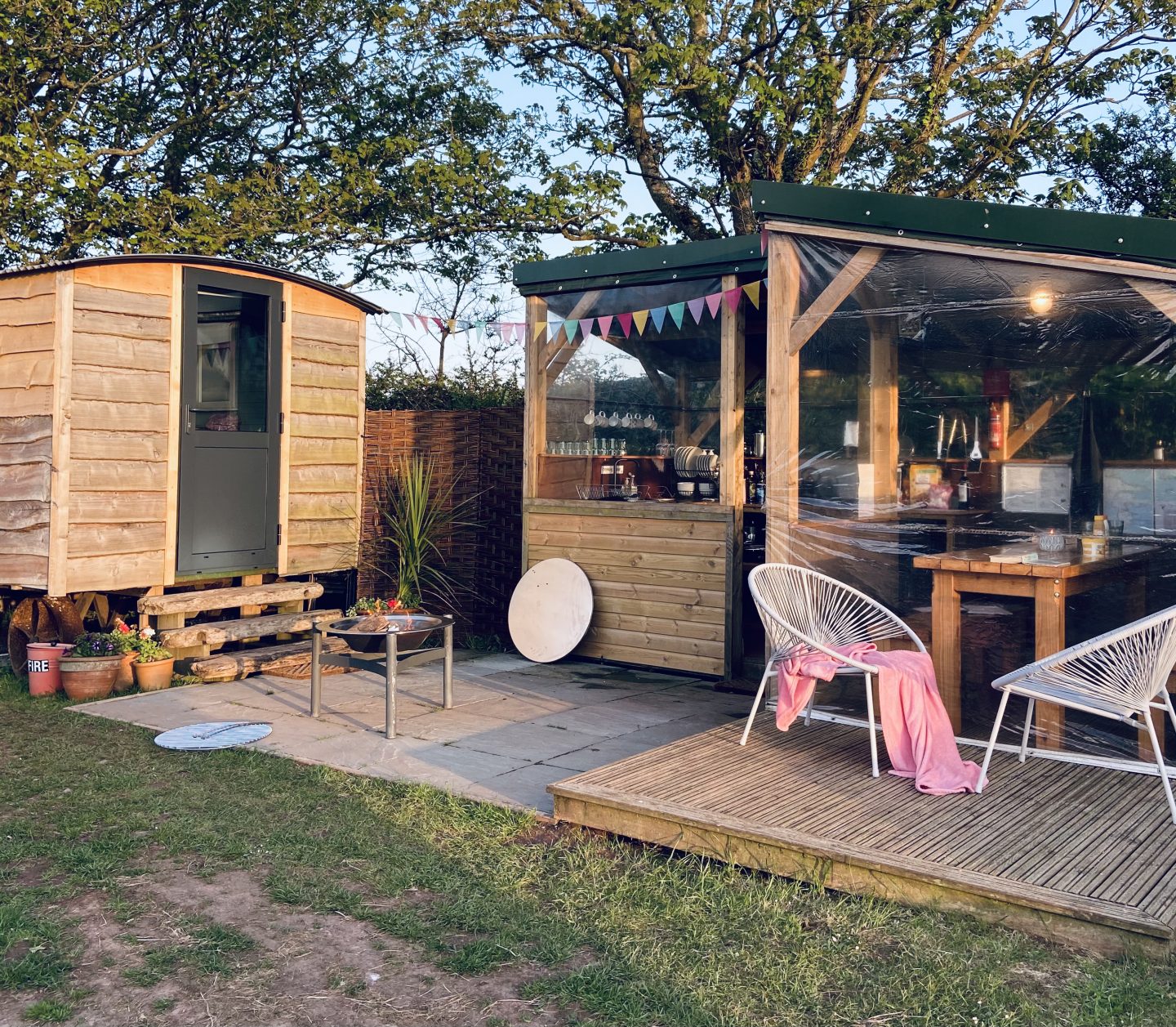 I really love cooking and doing kitcheny things like washing up outdoors. There is something so wholesome and relaxing about it, everything feels like it’s moving at a different pace, even though you’re essentially doing the same as you would at home.

Belle makes an excellent fire – a perk of all the kids survival camps I forced her on when she was younger and I needed childcare in the holidays – and so I was indulged with a fire every single night. We were so lucky with the weather. Wales isn’t exactly known for being dry and sunny, but while the rest of the UK was being drowned and blown around every night, we had this magical little pocket of nice weather. 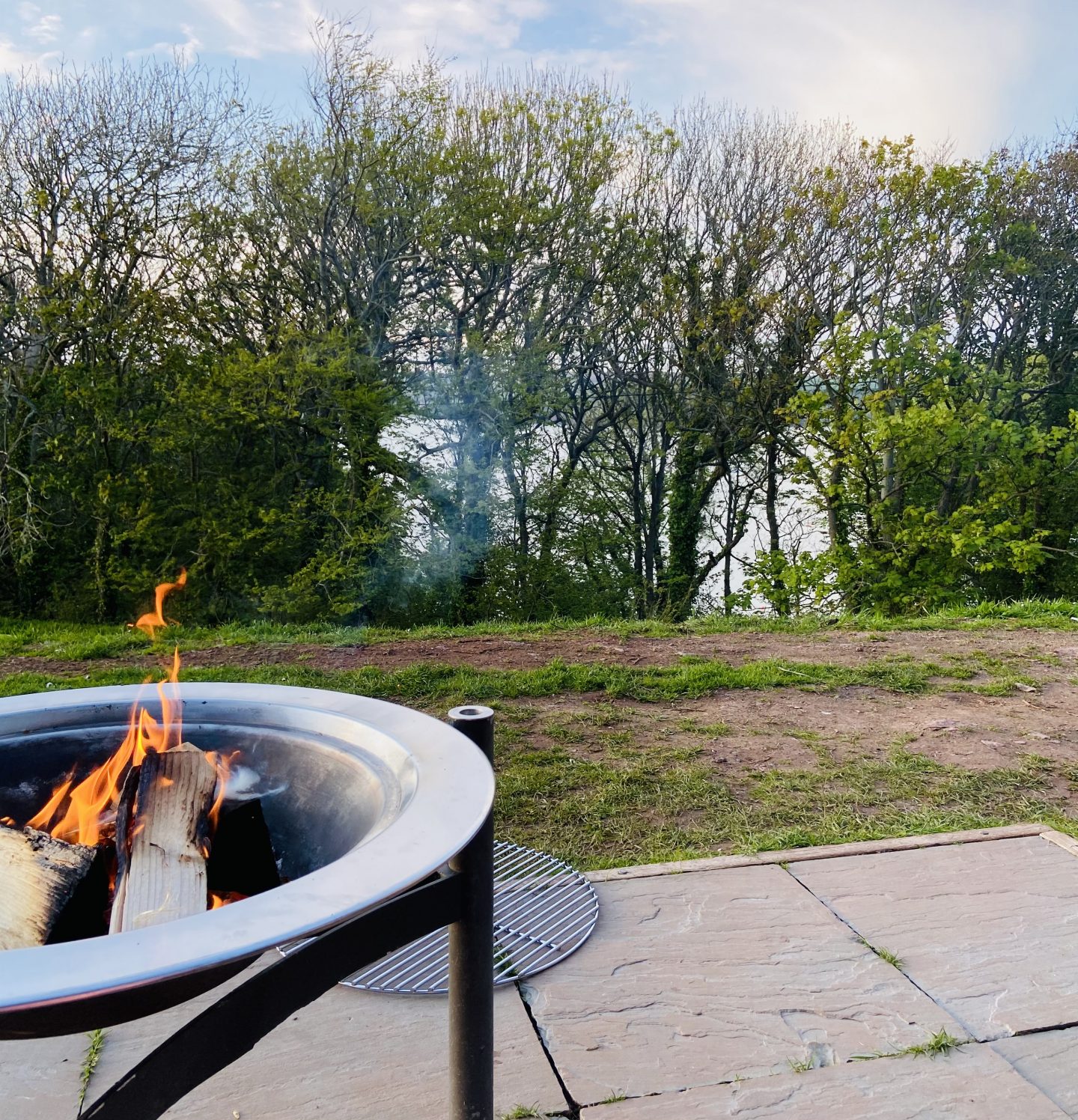 We sat outside with a fire and blankets and marshmallows and played Battleships and watched the sunset. It was blissful.

One evening we walked the 450m down the track into Dale and had dinner at The Griffin. It was our first inside meal in a restaurant this year. I had huge scallops and creamy Dover sole and chocolate brownie and two large glasses of wine and have possibly never felt happier. 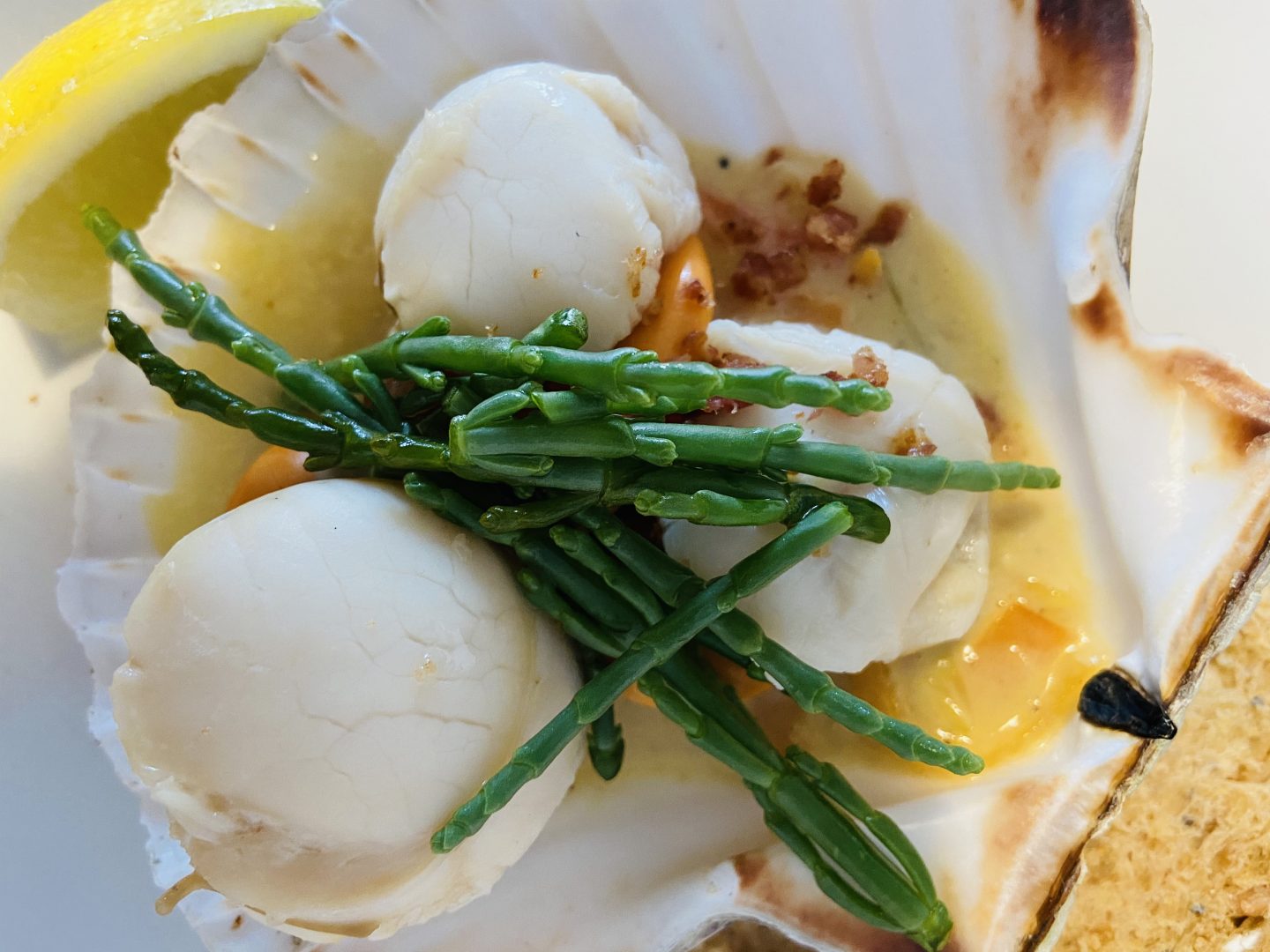 I hadn’t realised how much I needed the break until we were there. Sometimes you don’t notice until you stop do you? It was just so lovely to have a change of scene, to not have all the STUFF around us, reminding me of things I probably should be doing. I always come back from holidays like this and want to throw away at least half my possessions. 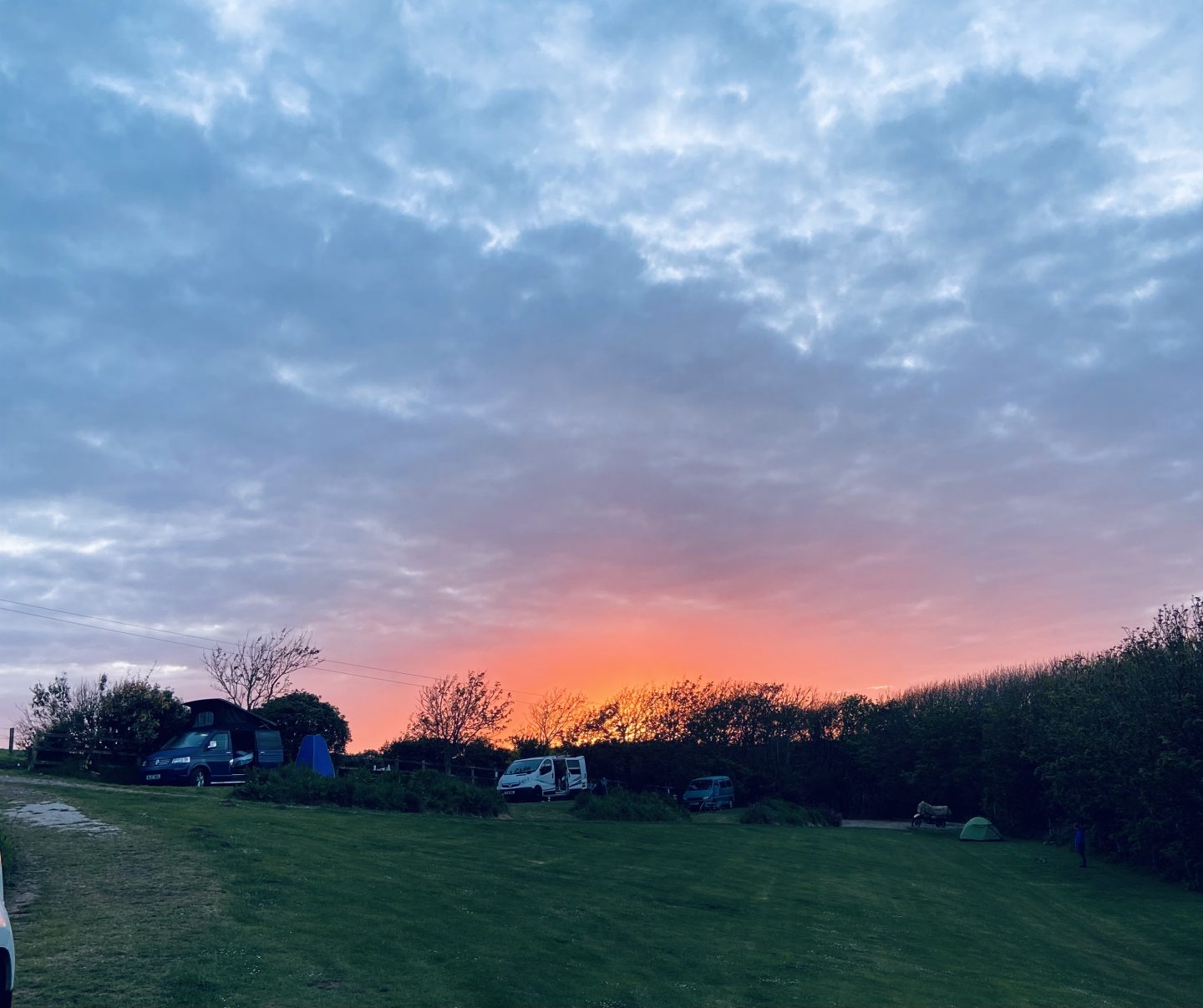 We were both actually quite nervous about our day trip to Skomer Island. It might sound silly, but we were worried about being bored I think.

For the trips where you land on the island rather than just have a boat tour, you basically just get LEFT for about four and a half hours. The island is small, has no shelter or shade, one compost toilet and, if you can even believe it, NO CAFE. Belle isn’t a massive walker and so I was anxious that after half an hour we’d have run out of energy/things to say to each other and would be just sat on the dock playing Battleships and waiting for the boat to take us home again. 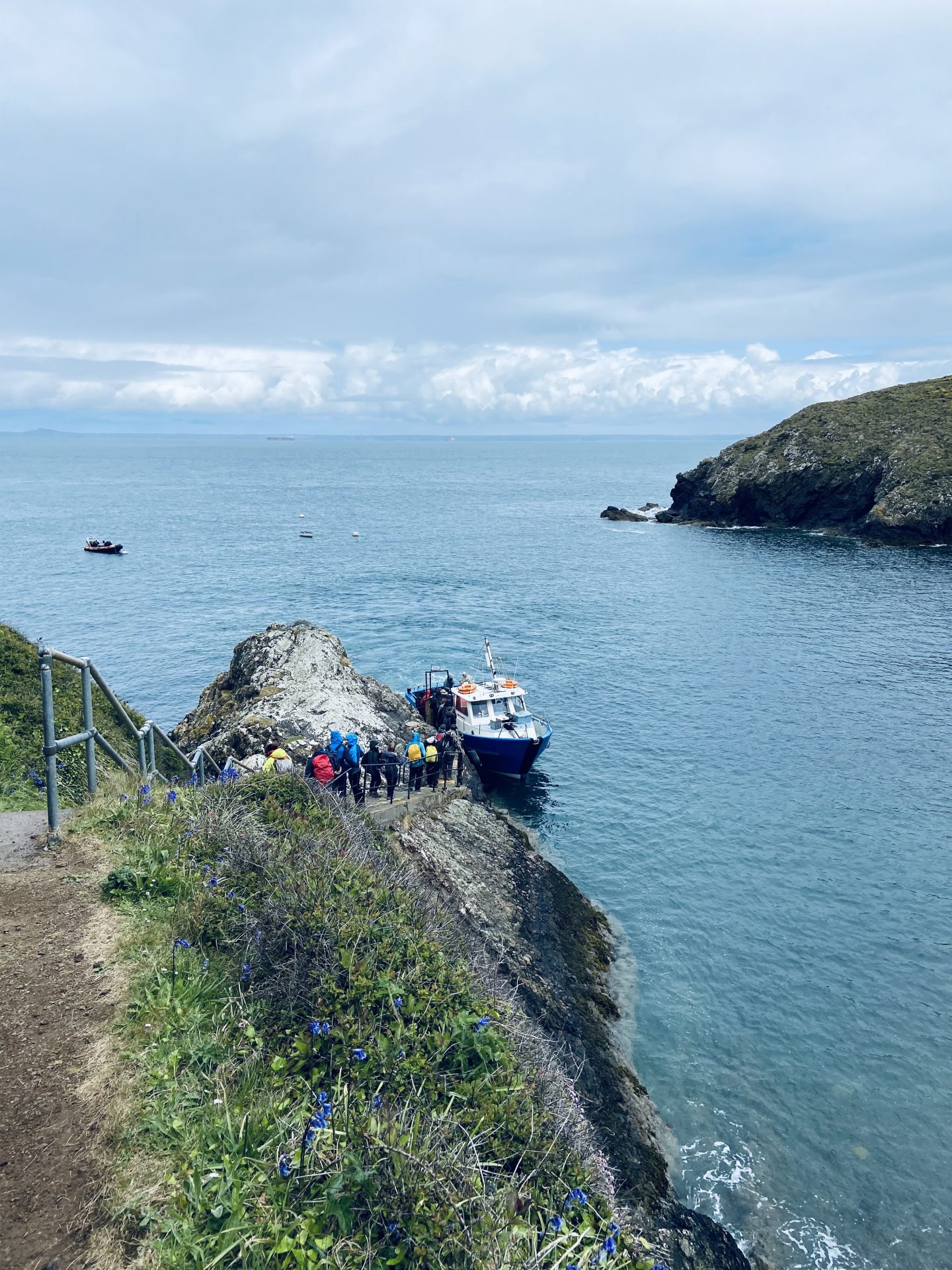 I needn’t have worried.

The blue skies and cool breeze definitely helped, but we ended up having such a good time – we really surprised ourselves. We walked and talked and gazed at the bluebells and ate our packed lunch and spent ages just sat on the path watching the (very small) puffins popping up out of their holes and attempting to carry twigs three times their size.

We had an absolutely wonderful break at Point Farm and I would definitely recommend it for a Pembrokeshire holiday – I already have to several friends. They are pretty well booked but there is still some availability for this year so crack on and visit their website to find out more. 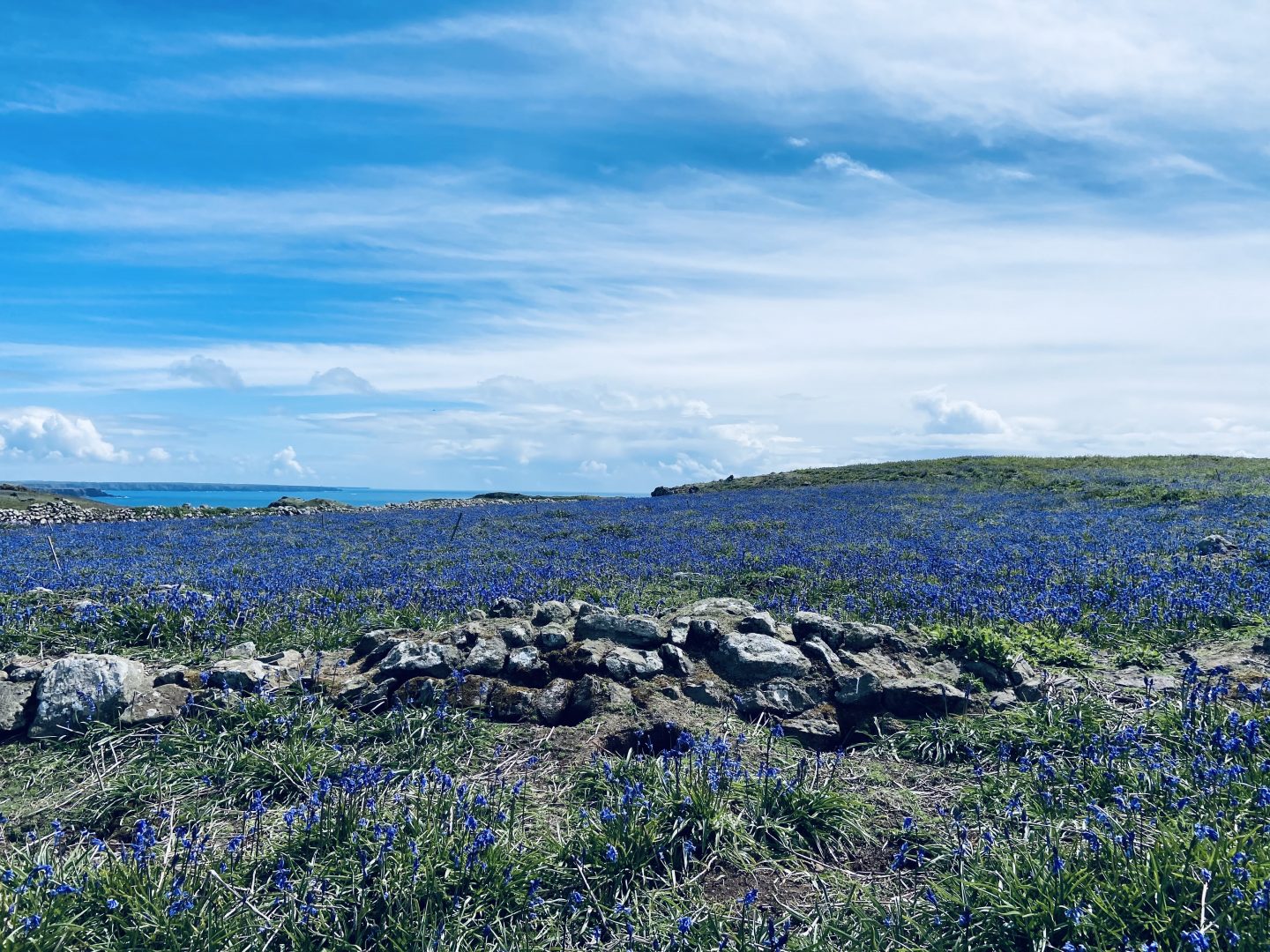 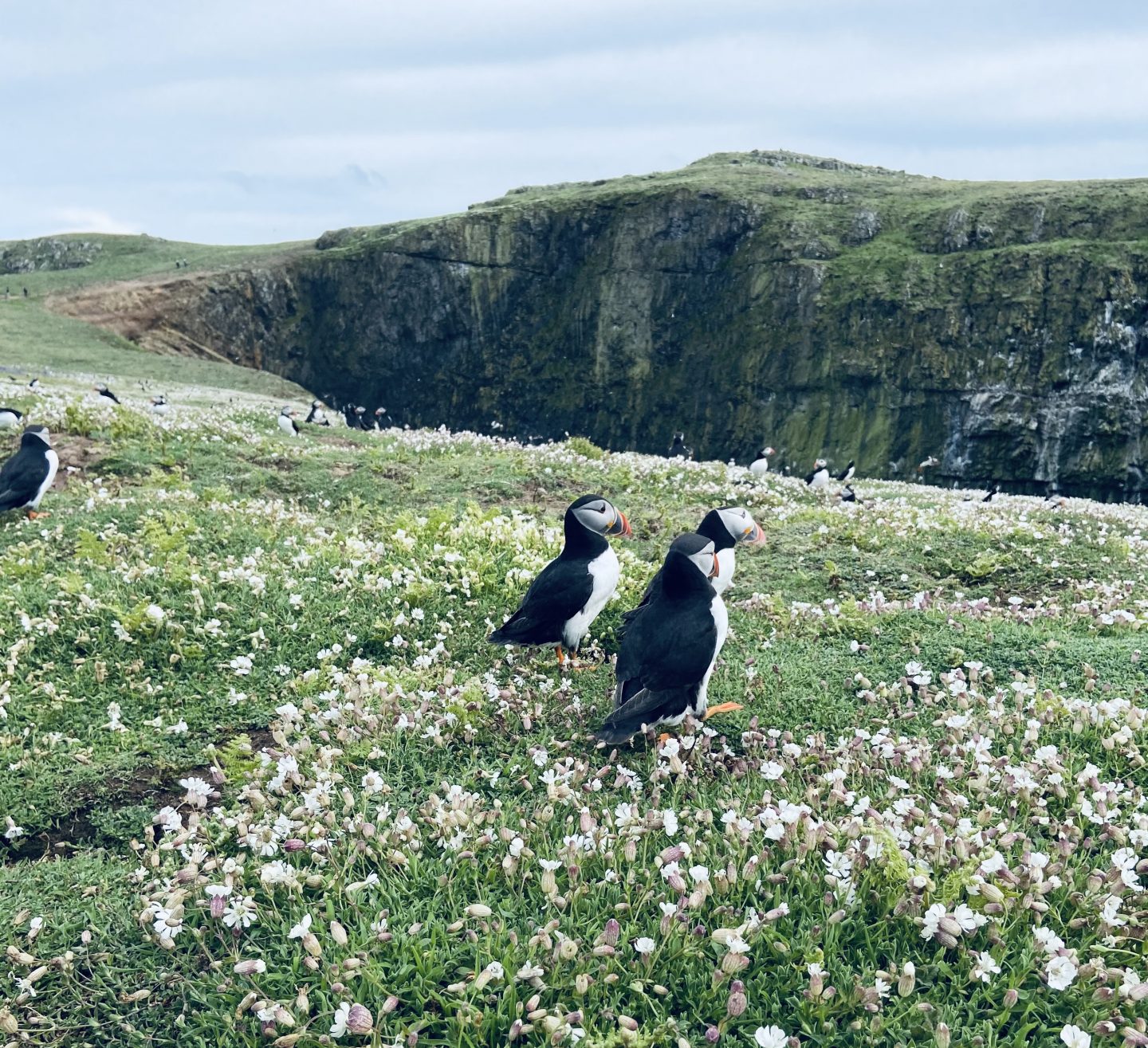 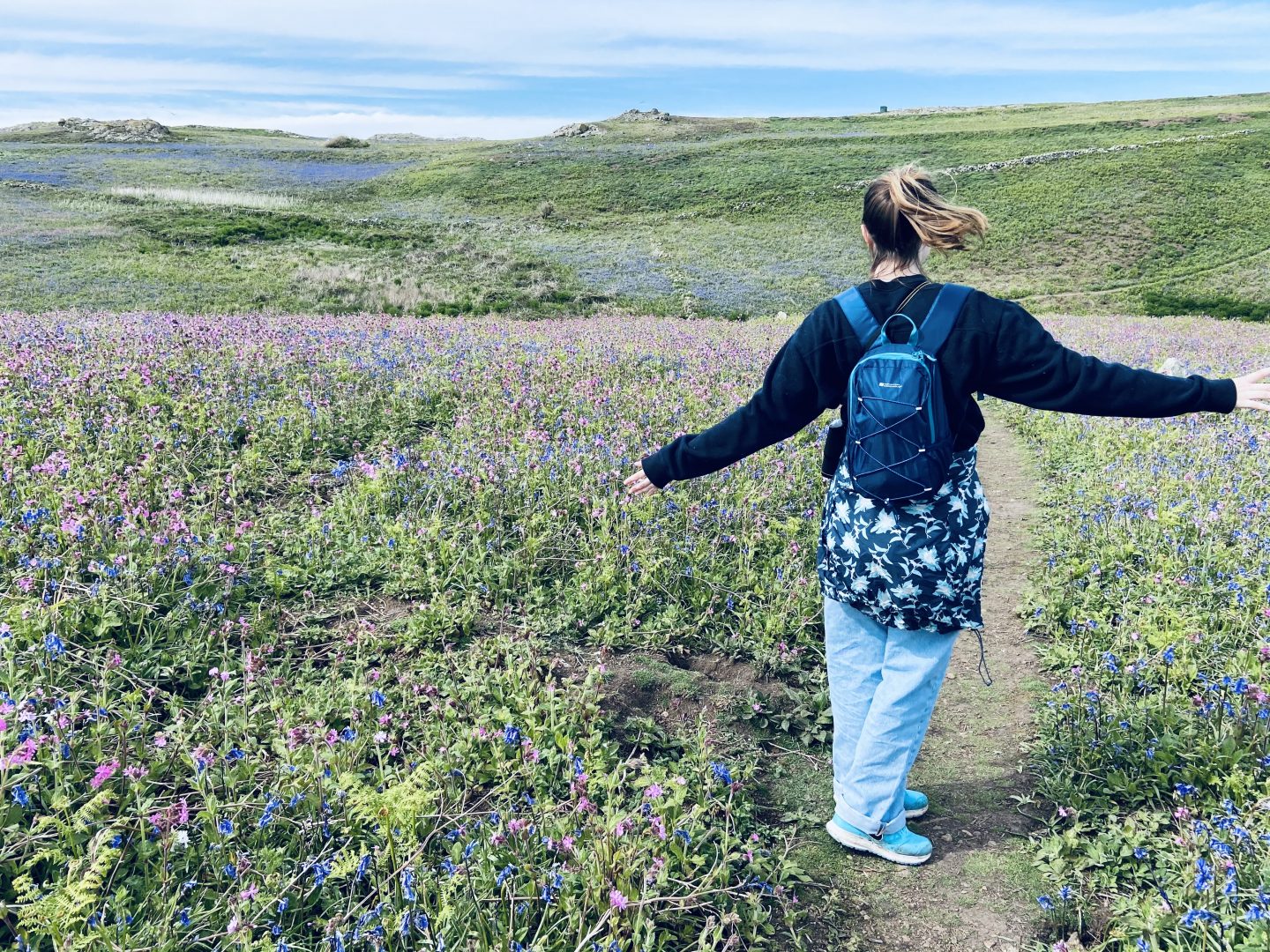 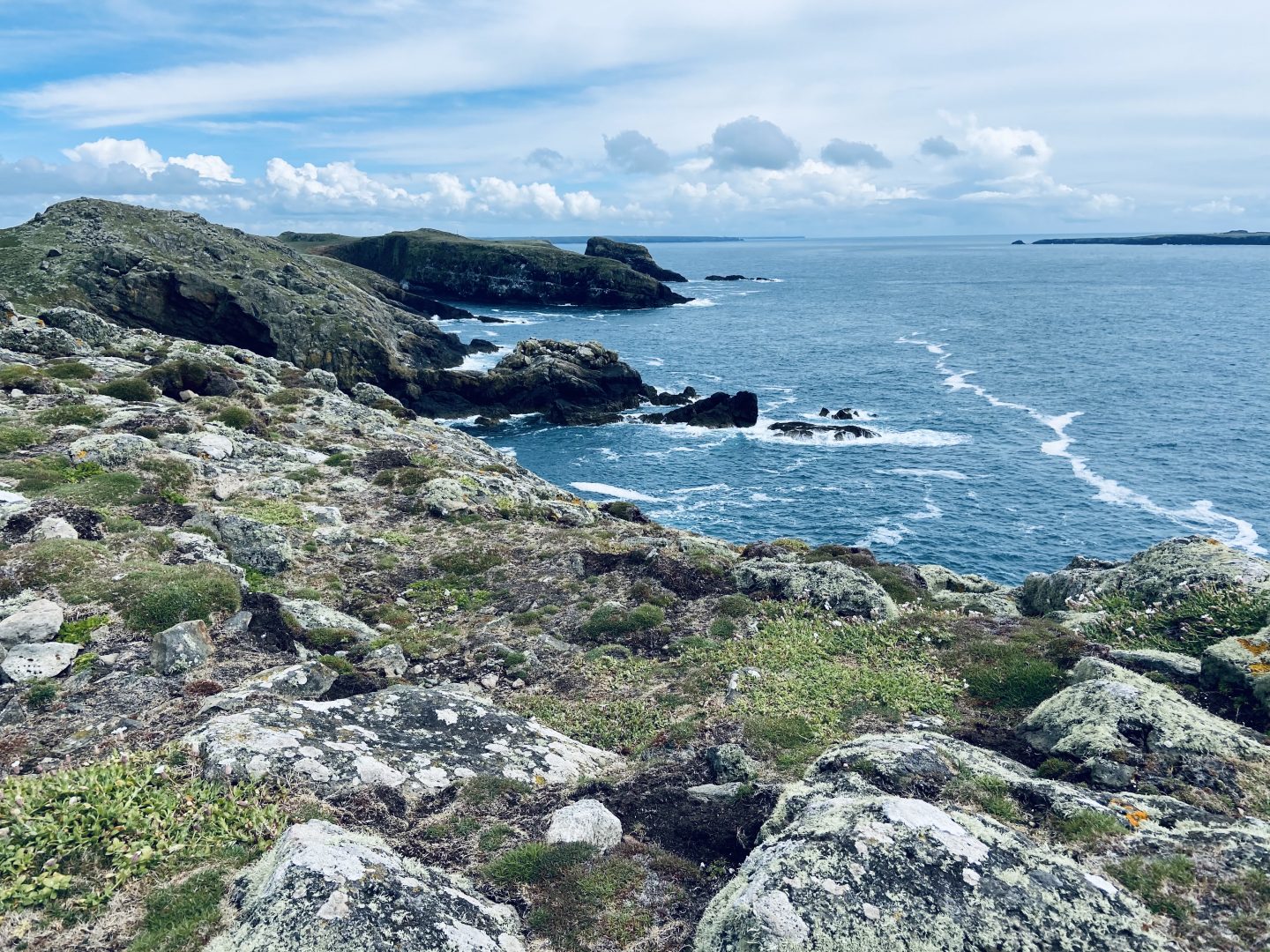 We stayed free of charge at Point Farm for three nights for the purposes of this review.

Advertisement feature in association with Car Guide How confident do you feel when it comes to buying a new car? Are you th...

END_OF_DOCUMENT_TOKEN_TO_BE_REPLACED

How free do you feel after freedom day? – Slummy single mummy

Firstly, can we take a moment to throw up a bit in our mouths at the expression ‘freedom day’? It’s tacky and gross, but mo...

END_OF_DOCUMENT_TOKEN_TO_BE_REPLACED

Got SUP? 10 Best Places to Paddleboard in the North West – Who’s the Mummy?

Are you looking for the best places to paddleboard in the North West?  Whether you’re new to SUP or a seasoned paddle boarder, che...

END_OF_DOCUMENT_TOKEN_TO_BE_REPLACED

Advertisement feature in association with Lakeland Furniture I recently set up an alert for houses near me on Rightmove. I’...

END_OF_DOCUMENT_TOKEN_TO_BE_REPLACED

F1 2021 review: New EA game adds a new dimension to a format that has relied entirely on fast cars

The masterminds behind the FIFA and NBA game series have bought Codemasters, t...

END_OF_DOCUMENT_TOKEN_TO_BE_REPLACED

UK to review sale of chip manufacturer to Chinese-owned firm

Britain's national security adviser is looking into the sale of a major UK chi...

END_OF_DOCUMENT_TOKEN_TO_BE_REPLACED

I was provided with free wetsuit hire for the purposes of this honest review.  If you’re a curvy, plus-sized or larger person then...

END_OF_DOCUMENT_TOKEN_TO_BE_REPLACED

Today’s Untold Stories is contributed anonymously by a mum of one who I met randomly online a few months ago. We got to ta...

END_OF_DOCUMENT_TOKEN_TO_BE_REPLACED

Advertisement feature in association with Portify – the app that could help improve your credit score We flew to Ireland a ...

END_OF_DOCUMENT_TOKEN_TO_BE_REPLACED

Farm facts: Quality essential oils from the ground up

Ever wonder how we get your favorite oils and blends to be so pristine? It starts from the ground up! From the Whispering Springs Fa...

END_OF_DOCUMENT_TOKEN_TO_BE_REPLACED

How to improve your credit score as a single parent – Who’s the Mummy?

This is a sponsored post in partnership with Portify I never really thought a lot about my credit score until I became a single ...