Our Family Springtime 2021 – The Oliver’s Madhouse 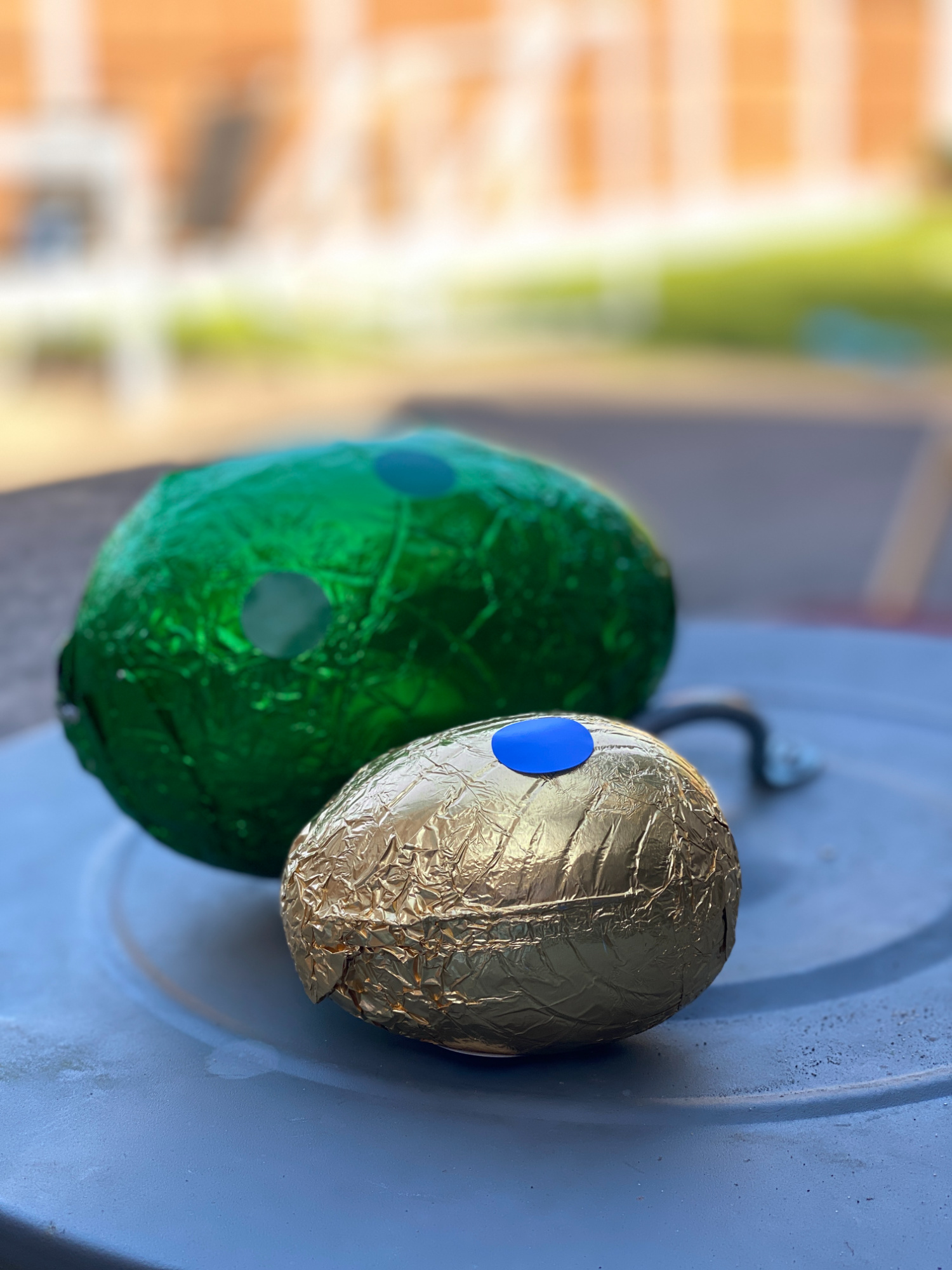 This year we knew that big family plans and events were not going to be easy.

The Governments UK Roadmap Out Of Lockdown was set out weeks ago and if all went to plan the closest we could get to seeing family and friends was sitting outside with a maximum of 6 people either from different households or more than 6 but only from 2 households.

As soon as I could and we were able to legally see people in the garden Over the Easter period I planned to see my friend and her beautiful baby for a quick catch up on the Saturday morning and then later that day for my sister and her partner to come round and spend the afternoon with us.

Good Friday started our Easter weekend and my in laws popped around to see us and make plans for the second week of half term as my mother in law is taking over kid duty while my nail and beauty business opens for the first time in 4 months!

The weather had not been on our side totally as it had mainly been cold in the garden but at least it had been dry. The sun has been out but it’s not been hot.

My friend and her baby popped around to have a quick catch up and I finally felt like there was good things to come. I had missed her and missed chatting with her and putting the world to rights.

Her beautiful daughter was born as we were going into lockdown last year so I have not had a cuddle yet but it was nice seeing her smile in her pushchair at me and I am sure getting a cuddle soon will be worth the wait. I am just hoping next time its a little warmer as it was rather cold on the patio.

Later that day we finally got to spend some time with my sister and her partner. We originally had plans to meet up on Christmas Eve but when the Christmas COVID restrictions changed we were left with no choice other than to cancel.

Thankfully our friends and family have been super supportive of our decision to follow the rules and regulations. Many people we know have not followed them as they should. Personally I feel that is their choice. But for us we have really tried hard to not twist the rules to fit. My sister and her partner were super supportive on Saturday of the fact we said under no circumstances were we going to sit in doors so they came prepared with massive coats and in my sisters case leggings under her trousers!

We ate food outside and they only ventured in for the toilet and they disinfected after they had been in so we kept as safe as could be.

The boys got to play cricket with uncle Paul on the garden and Jacob was obsessed with my sisters little dog ‘Tiny’ that they brought with them.

Honestly this time in the garden with my family and friend was so needed. I don’t think I had even realised how much I had missed peopling. I am now counting down the days to spending the day with my best friend and my god children next week. 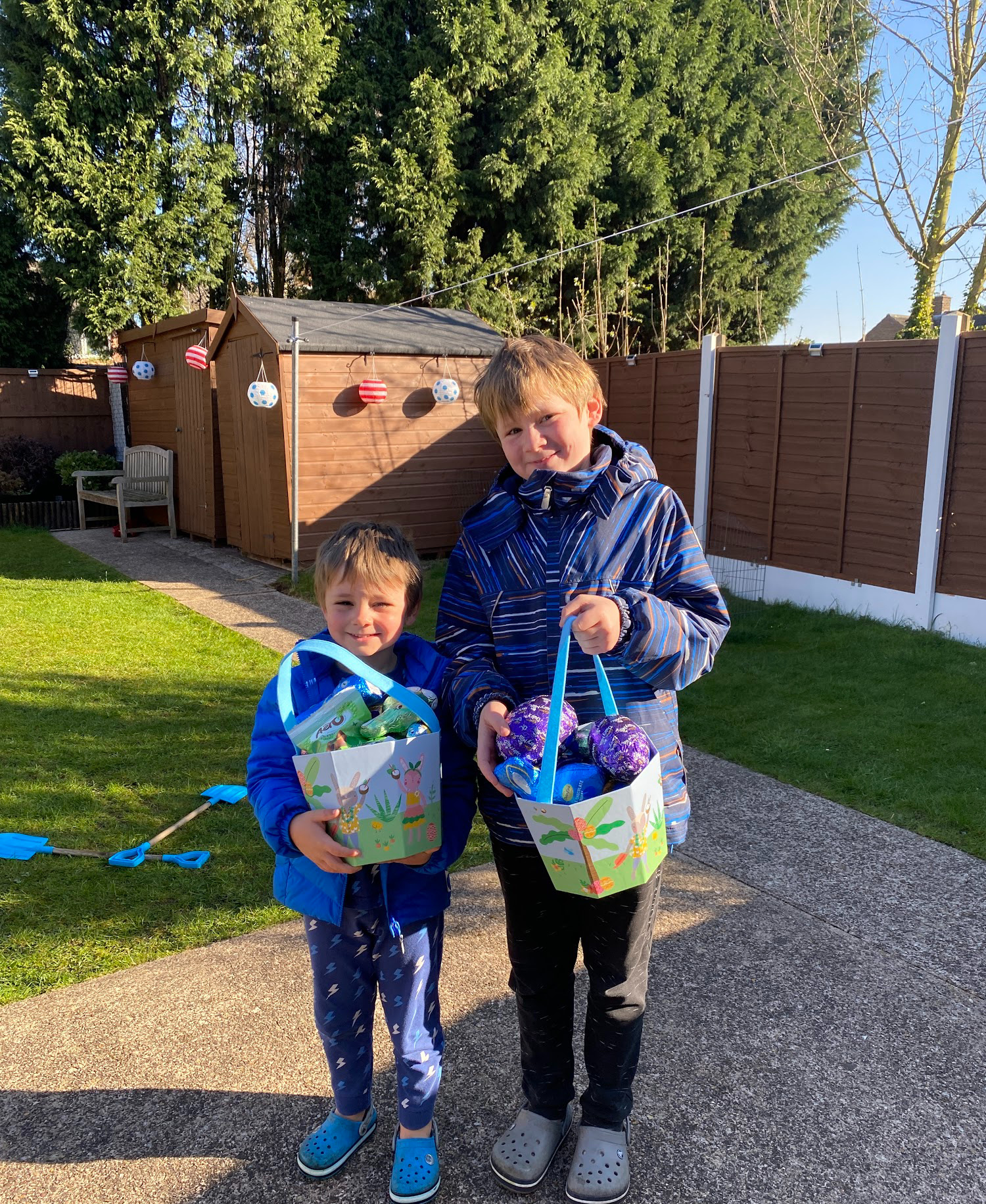 Easter Sunday was a day for slobbing about with just the 4 of us. We had a surprise delivery late Saturday night in the form of the Easter Bunny who posted a card through the door and left 2 Easter Eggs for the boys! 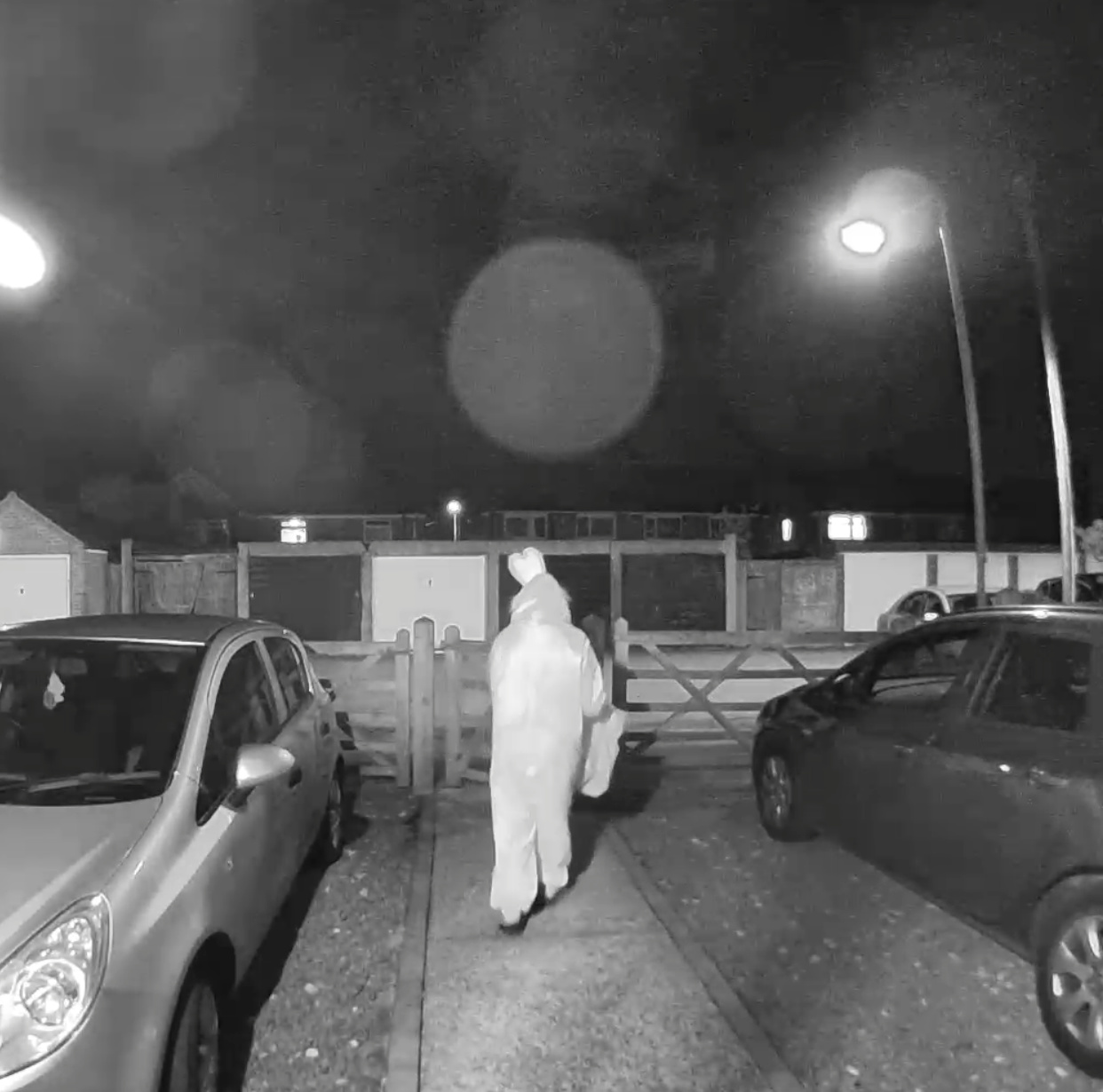 Ollie and I were both somewhat miffed at who it might have been as no one had said they were going to do it.

The boys however thought it was the best thing ever as we captured the sneaky bunny on the doorbell camera! 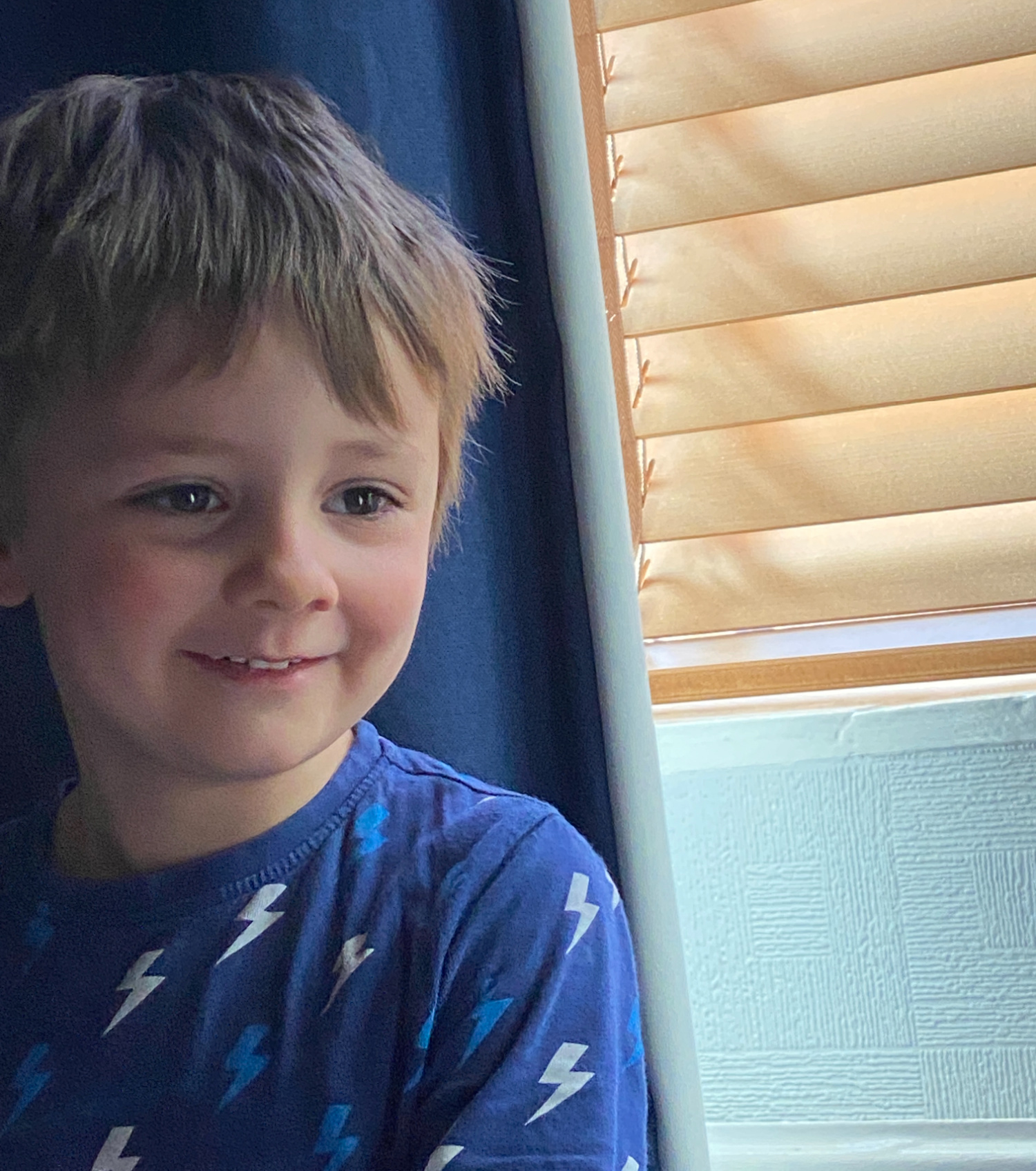 After some comments on Social Media we had an inkling it might be our wonderfully crazy neighbour with a heart of gold … after some hints we were sure it was and honestly could not thank her enough.

The boys faces watching the Easter Bunny on video was utterly priceless and it was such an amazingly thoughtful thing to do for my boys. Even thinking about it makes me well up!

Thankfully we finally got to spend some time with my best friend and my god children at Sherwood Pines having the coldest picnic known to man and beast! However, I can’t explain how emotional it made me driving home and seeing their faces for the first time in almost a year. 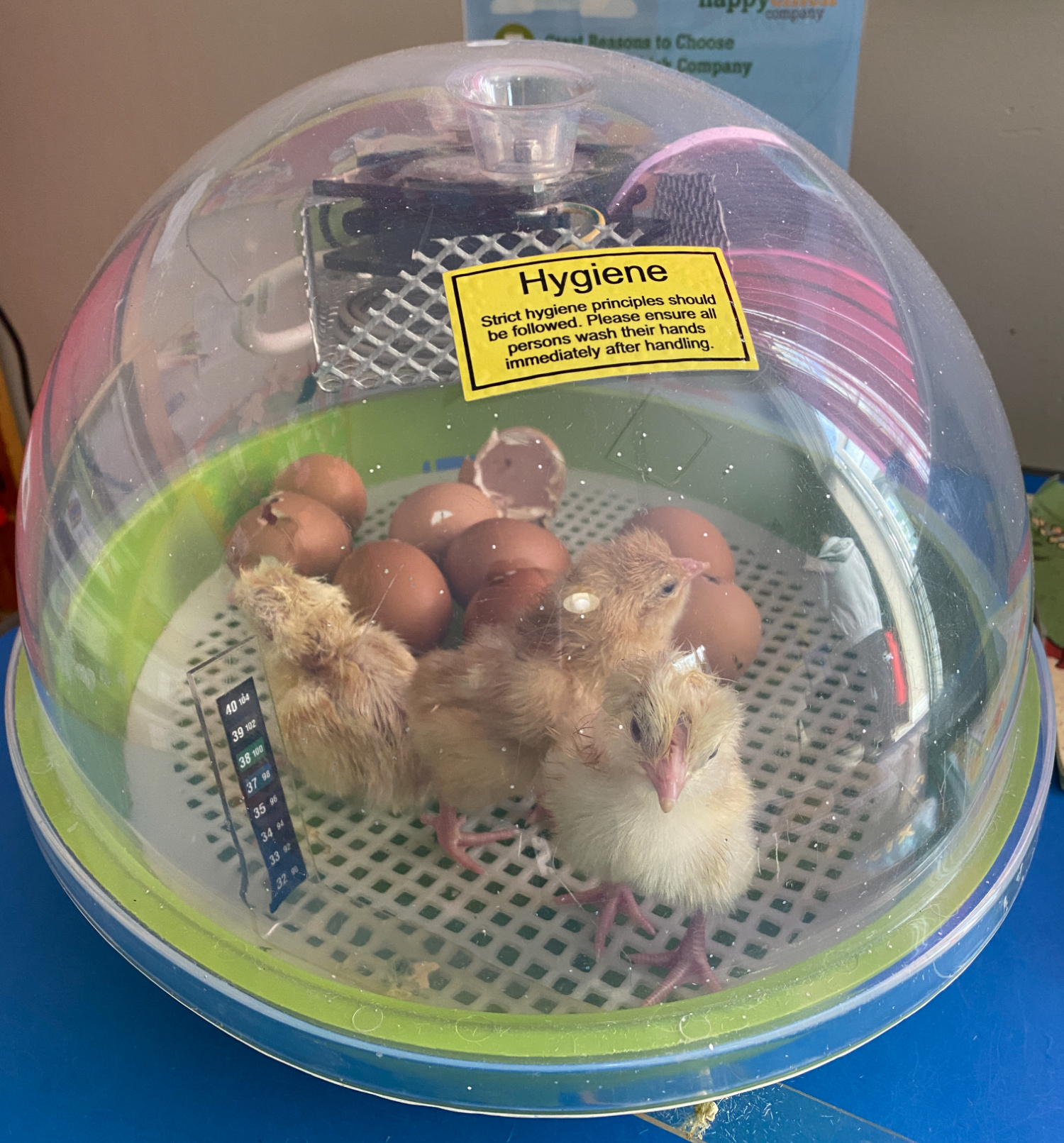 I have been working in a private nursery during the pandemic and they had some chicks to hatch for their preschoolers and since Saturdays I haven’t been working doing nails and beauty I signed up for chick duty and took Ollie and the boys with me to care for them. What an amazing experience it was for us all to take care of the chicks for the day. We may not have been to the most amazing places but we got time with some amazing people and that  in this pandemic is priceless.

Now we are trying not to make too many plans as the UK COVID Roadmap is set to release new guidelines and release the restrictions further from next Monday. However Finally I am feeling hopeful at what is to come.

This last year it come as no surprise that my blog had taken a back seat and my mojo generally took a tumble. I have avoided social ...

END_OF_DOCUMENT_TOKEN_TO_BE_REPLACED

The Duke and Duchess of Sussex have been given a "special award" for deciding ...

END_OF_DOCUMENT_TOKEN_TO_BE_REPLACED

Donald Trump's family business and its head of finance have been indicted on c...

END_OF_DOCUMENT_TOKEN_TO_BE_REPLACED

One of President Joe Biden's two dogs in the White House has died, the preside...

END_OF_DOCUMENT_TOKEN_TO_BE_REPLACED

A man said to be the head of the world's largest family has died in northeaste...

END_OF_DOCUMENT_TOKEN_TO_BE_REPLACED

*Advertorial Feature With Dare2b* Last year my parents decided to make the move of a lifetime and retire to the East coast.  They fo...

END_OF_DOCUMENT_TOKEN_TO_BE_REPLACED

The First Few Jaunts Out With Friends – The Oliver’s Madhouse

Over the last 15 months life as we knew it has altered and changed and I am not sure if it will ever be the same as it was before. I...

END_OF_DOCUMENT_TOKEN_TO_BE_REPLACED

A runaway monkey has been reunited with its owners after being found at a trai...

END_OF_DOCUMENT_TOKEN_TO_BE_REPLACED

*Advertorial Feature With Showcase Cinemas* Over the last year there have been many things that I have missed. Friends, Family and q...

END_OF_DOCUMENT_TOKEN_TO_BE_REPLACED

An explosion and fire at the house of the Celtic football club's chief executi...

END_OF_DOCUMENT_TOKEN_TO_BE_REPLACED

As most of you know here at The Oliver’s Madhouse we have been avid fans of Playmobil for many years and one of the newest set on th...